Our goal is to proactively provide our customers with information that will help them be successful. If you have additional questions, please contact us at SCIService@sputteringcomponents.com.

What is thin film coating?

A thin film is a metal or metal-ceramic layer of material that is deposited, atom-by-atom, on the surface of a substrate. The thin film forms a bonded layer that changes the part's appearance, durability or function. 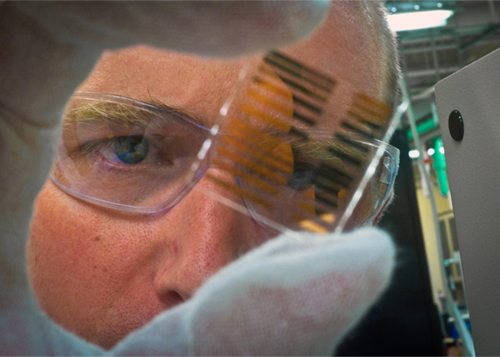 Thin films don't affect dimensional tolerance or the substrate's desired textures. They are used to improve a product's color, light reflection or refraction, hardness or electrical insulation and conductance.

The controlled synthesis of materials as thin films (a process referred to as "deposition") is a crucial need in many industries. For example, architectural glass, displays, touch panels and solar cells all contain thin films. A familiar example is a mirror, which typically has a thin metal coating on the back of a sheet of glass to form a reflective interface.

Two basic methods are used to create thin films: 1) Chemical deposition, where a fluid precursor undergoes a chemical change at a solid surface and 2) Physical deposition, which uses mechanical, electromechanical or thermodynamic means.

A type of physical deposition is physical vapor deposition (PVD), which occurs in a vacuum. Sputtering is a type of PVD.

What is physical vapor deposition?

Also known as vacuum deposition or vacuum coating, physical vapor deposition (PVD) is a process where source material starts from a condensed phase and then transports through a vacuum or low pressure gaseous environment in the form of vapor (plasma). The vapor then condenses on a substrate to produce a thin film coating. 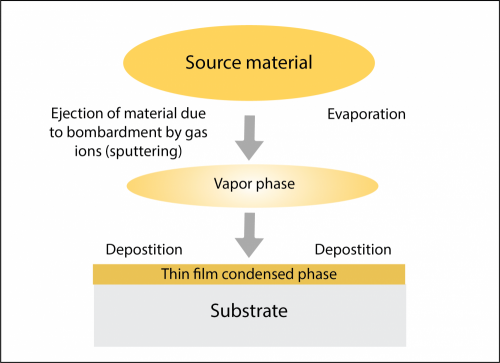 Sputtering (sputter deposition) is a method used to create thin films and is a type of physical vapor deposition. Unlike some other vapor deposition methods, the material does not melt. Instead, atoms from the source material (target) are ejected by momentum transfer from a bombarding particle, typically a gaseous ion.

Advantages: An advantage of this process is that sputter-ejected atoms have kinetic energies significantly higher than evaporated materials for better adhesion. Sputtering can be performed bottom up or top down. Another advantage of sputter deposition is that even materials with very high melting points are easily sputtered.

Applications: Sputter deposition is used in the following commercial applications:

Please watch our YouTube video for more information about sputtering:

Sometimes called "the fourth state of matter," plasma is one of the four fundamental forms of matter that commonly exist. The other three are solid, liquid and gas. 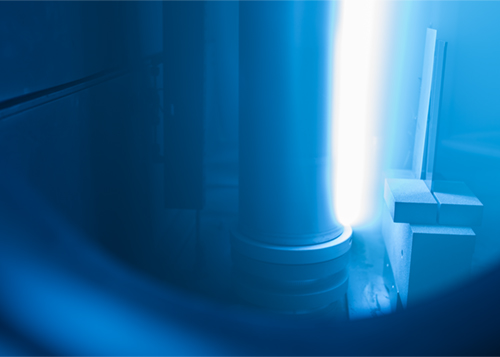 Plasma contains ions, free radicals, neutral byproducts, and photons. Plasma can be created by heating a gas or subjecting it to a strong electromagnetic field. This decreases or increases the number of electrons, creating positively or negatively charged atoms or molecules called “ions.”

With plasma, positively charged nuclei swim in a "sea" of freely-moving disassociated electrons, similar to the way such charges exist in conductive metal. This electron "sea" allows matter in the plasma state to conduct electricity.

Like a gas, plasma does not have definite shape or volume. Unlike gases, however, plasmas are electrically conductive, produce magnetic fields and electric currents, and respond strongly to electromagnetic forces.

The plasma state, although less understood, is quite common. Lightning, electric sparks, fluorescent lights, neon lights, plasma televisions and some types of flame are all examples of illuminated matter in the plasma state.

What is magnetron sputtering?

While conventional cathode sputtering can deposit extremely thin films down to the atomic scale, it tends to be slow and most effective only with small substrates. The bombardment of the substrate can also create overheating or damage to the object to be coated.

Magnets (usually permanent magnets) behind the cathode confine electrons over the negatively charged target material, enhancing both the efficiency of the initial ionization process and allowing plasma to be generated at lower pressures.

The lower pressure reduces both background gas incorporation in the growing film and energy losses in the sputtered atom through more gas collisions since electrons follow helical (spiral) paths around magnetic field lines. The longer paths mean a higher probability of ionizing collisions with gaseous neutrals near the target surface than would otherwise occur.

The result is very dense plasma and a higher deposition rate. The sputtered atoms are neutrally charged and are unaffected by the magnetic trap.

Following the shape of the magnetron, the target material is consumed in an oval shape, called a "racetrack."

Modern cathodes offer excellent target utilization and high deposition rates. Almost any metallic material can be sputtered. Sputtering magnetrons can be oriented in any position to accommodate equipment design. The target is water cooled to minimize radiation heat.

What is a rotary (cylindrical) cathode/magnetron?

A rotary (cylindrical) cathode is a device used for sputtering target material from the surface of a rotating target tube onto a substrate.

Electric power is transmitted to the rotating target tube. The cathode is the target tube surface since the electrons leave from the target surface and enter the plasma. Cooling water is usually used inside the target tube for sputtering process cooling.

Powered by a motor, an end block rotates the target tube. It has rotary seals for both cooling water and vacuum. While the cathode assembly is mounted to the inside lid of a vacuum chamber, the end blocks can be external to the chamber or inside the chamber.

What are the advantages of rotary (cylindrical) magnetrons over planar magnetrons?

Higher target utilization: Rotary cathode target utilization is characteristically between 70-85 percent versus 25-40 percent with planar targets. This is because the target moves through the stationary plasma and is eroded all around its circumference.

Reduced nodules with TCOs: Lower target temperatures and more efficient cooling of the target allow rotary cathodes to run at higher power densities than planar cathodes without forming nodules when depositing TCOs such as ITO.

Longer campaign times: Campaign times are longer because most rotary targets have three to four times the sputter material available due to the geometry of the target, Targets life is longer due to higher utilization.

Faster target changes: Changing targets is much faster than with planar systems, especially with most Sputtering Components configurations because all utilities are introduced on one end block. The other end is a simple support.

Shorter burn-in time: Target burn-in time is reduced as there is much less material re-deposition onto the rotary cathodes. Although rotary targets are sometimes ‘burned in’ at the start of a run, planar cathode ‘burn in’ often interrupts production.

What is reactive sputtering?

What is radio frequency (RF) sputtering?

Radio frequency (RF) sputtering is a type of sputtering that is ideal for target materials that have insulating qualities. Like direct current (DC) sputtering, this technique involves running an energetic wave through an inert gas to create positive ions.

RF sputtering needs about nine times more input voltage than DC sputtering because the creation of the radio waves requires more power input to achieve the same effect as an electron current. The plasma can be maintained in lower pressure than DC sputtering. As a result, a more direct pathway for the particles to travel to the substrate material is created by fewer collisions between the target material particles and the gas ions.

What is a large-area substrate?

Large-area substrates are usually wide flat rigid panels (such as glass or plastic) or wide flexible webs (typically plastic or metal) that are coated as they pass by the stationary magnetrons. 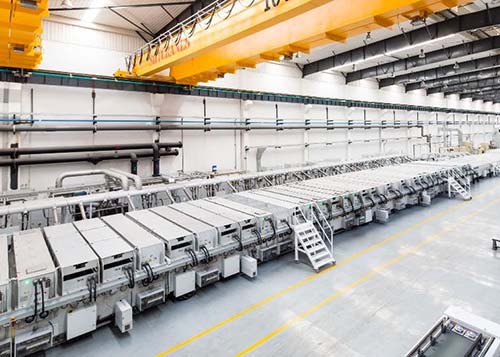 Some examples of products made from these substrates include low-E window glass, solar panels, solar control window tint and flat-panel displays.

How do I connect to my SCI rotary cathode?

You will need to provide four types of connection to your SCI rotary (cylindrical) magnetron:

Cooling water for SCI rotary magnetrons: Provided to the cathode using ¾” or 1” flexible hose, connecting to a hose barb or other customer-specified water fitting. Nominal inlet pressure should be 40 psi, with a maximum of 100 psi. Water flow rates should be 1 liter per minute per kW of applied power, or greater. Water quality should be 100-300 micro Siemens, with 75 micron filtration. Inlet temperature should be less than 30°C and maintained above the ambient dew point to prevent condensation.

Drive motors: SCI provides AC inverter duty motors with its end blocks. The inputs to this motor are 230 V, three-phase,10-90 Hz, 480 V is available. Speed control is provided by the use of a customer supplied variable frequency drive (VFD.) The VFD can be selected to accept your local input voltage and number of phases and convert to the motor inputs. SCI can also supply these drives upon request.

Drive encoders: SCI provides an encoder with every end block. The encoder ensures cathode rotation and, if desired, measures rotation speed. The encoder is connected depending upon how it will be used:

How long should my target be?

The standard calculation that we use is the following:

This equation is typically used for TTS distances between 75 to 150 mm. If the application has uniformity requirements higher than +/-2%, we suggest to add additional length to the target in order to reduce the initial uniformity tuning required for rotary-type sputtering cathodes.

How many cathodes do I need for my application?

SCI will calculate the deposition rates and the number of rotary magnetrons required for your application. Please contact us at SCIService@sputteringcomponents.com.

If you wish to do the calculation yourself, please note the following:

Each target material and coating process has limitations as to how fast the material can be deposited from each magnetron.

Thus each different process has a limited dynamic deposition rate (DDR).These limits for most materials have been experimentally obtained and are correlated with the power density that was applied to the target at the time of the deposition.

Using this information, we create a unit for calculation the normalized dynamic deposition rate (nDDR) that has the units of (nm-m/min)/(kw/m).This unit can be used along with the maximum power density that target vendors recommend using with their targets to figure out approximately what the dynamic deposition rate of each rotary magnetron will be for a particular process.

How do I calculate my dynamic deposition rate?

To determine your dynamic deposition rate, multiply the thickness of the coating you want to make in nanometers by the velocity of your substrate in meters per minute.

Example: With SiO2 coating that is 20 nm thick and a substrate speed of 1.5 meters per minute, the dynamic deposition rate is 30 nm * m/min:

What is the best way to handle and store a cylindrical target?

To avoid damage and contamination that could cause quality issues during the coating process, use simple precautions to store and handle cylindrical targets: 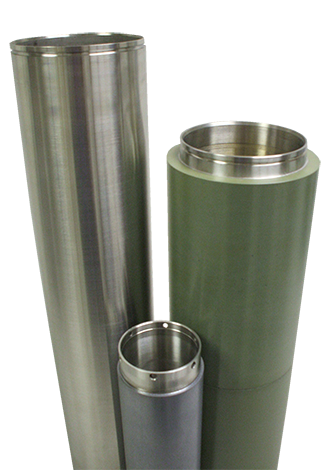 What is sputter yield?

The number of atoms ejected per incident ion (atoms/ion) is called the sputtering yield, Y. Sputtering yield is dependent on the following: